In selecting colours for an appropriate sign, it is important to consider the psychological connotations of different colours as well as the factors affecting visibility and legibility. (An extensive discussion of the cultural and psycho-physical reactions to colour is found in Visual Communication Through Signage, Vol. 3, Chapter 3, Claus and Claus, 1976.) Although we will detail the attributes that have come to be associated with certain colours, we do want to point out that the suggestions given below are not hard and fast rules.

The sign user should also be guided by his own sense of what is appropriate. 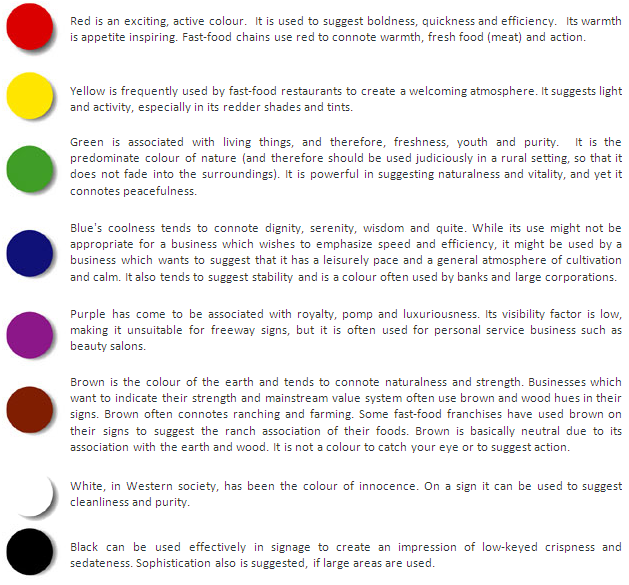 In assessing these colours, remember that fairly subtle shifts in tint and tone can create large differences in how a colour is perceived. While red is appropriate when used in a fairly limited area, when used over too broad an area, it can be overpowering. Simply, pale yellow can suggest daintiness, whereas a deeper yellow becomes a very sensuous and powerful colour.

In choosing the colour to be used on an outdoor sign, the sign designer or advertiser must keep in mind the characteristics of the group toward whom he is directing his advertising. Research has shown that older people tend to prefer blue because it is easier for them to see. Men prefer deep shades of a colour, while women prefer more delicate tints. In addition, there is some evidence that people in lower-income brackets prefer bright, undiluted, pure colours, while those in higher-income brackets prefer more subtle shades and tints. Children also react to certain colours positively. Bright colours attract and hold their attention. Yellows and reds are especially attractive to young children. Some fast-food establishments have selected colour combinations which appeal to young age groups; for example, McDonald’s emphasizes yellow and red.

Colours used on illuminated signs are also influenced by the time of day. Many spectacular night time displays look poorly constructed or maintained under the harsh light of day. If a 24-hour image is important, attention should be paid to how a sign looks throughout the entire day.